From arcade nostalgia to high definition realism: A short history of the TT game 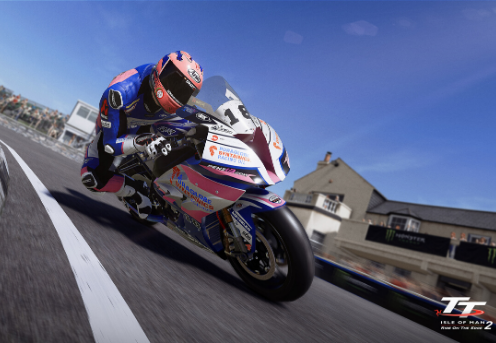 Growing up in the ‘90s on a digital diet of video games, I played every title I could get my hands on. If I was not at home playing on that year’s must-have console, I had a Nintendo Game Boy in my back pocket for some on-the-go Tetris or Pokémon.

Most of the games I would play were set in fictional worlds with fantastical characters. These worlds would draw you in like a good book; you would get lost in them, even when graphics and gameplay were limited in their sophistication.

But there were times I would play a game that was a little more grounded in reality, such as a sports game like Olympic Gold, where finger speed determined how fast your digital sprinter or swimmer would make it across the screen. However, for the most part, the games played by myself and my fellow gamers were set in a fictional dungeon or a magical kingdom.

Then in 1996, a year widely considered as one of the most important years for video game breakthroughs, I discovered a game which I probably didn’t appreciate as much as I should.

Manx TT Superbike was an arcade cabinet game developed by Sega. Here was a video game that was larger than life, with an actual bike you could ride on in place of a few buttons and a joystick. For a couple of twenty pence pieces, you could ride the entire 37.73 miles of the TT mountain course.

From what I remember, this arcade game was a lot of fun but extremely difficult, especially for anyone not used to riding an actual motorbike. It was unique in its design compared to other motorcycle arcade cabinets that would require you to use your feet on either side of the bike to steer left and right: Manx TT Superbike required you to keep both feet on the bike and steer by shifting your weight to tackle the course.

I am sure some who remember playing the game will testify to its level of difficulty, but there is no denying that the experience was unique and memorable, much like the actual TT.

A few years later, Sega brought out a console version of the game on the Sega Saturn. While this iteration was controller-based, the experience of racing around the course was just as exciting.

Being able to practice, improve your times, and enjoy the course without having to empty your pocket of change was something myself and fellow fans of the arcade version relished. The beauty of the home console version was that you did not have to be a professional rider, or have ever ridden a motorbike to enjoy playing.

Manx TT Superbike was a hit in both arcades and on home consoles the world over, and is fondly remembered by gamers and non-gamers alike.

The achievement of having our Island immortalised in a video game was one thing, but to feel like a star rider is something that I took for granted back then.

There are few other islands or real-world locations that can boast digital replication within a game. Yes, famous monuments and landmarks have been recreated in many video game landscapes, but a full 37.73 mile reproduction of the world’s most iconic road race is unique.

Granted, you couldn’t explore the Island outside of the course and just nip to your nan’s house for a cuppa, but you could ride past it at 130mph. And the fun wasn’t limited to just one game.

There have been many TT video games over the years. 2005’s Suzuki TT Superbikes was released on the Sony PlayStation 2, with a handful of sequels being released in the following years. More recently we have 2018’s TT Isle of Man: Ride on the Edge, which was developed by Kylotonn Racing and Big Ben Interactive. A sequel followed only a few months ago to critical acclaim, with Eurogamer stating it as “probably the best motorbike game [available on the market] right now”. The graphics, realism, and the sense of speed have been improved from the original, and it’s a game that any gamer (Island-based or not) can get stuck into and enjoy.

This brings me to the Virtual TT powered by Motul, a monumental moment in the history of the TT Races.

Eight riders are racing on this digital recreation of the mountain course. While the world of sport adjusts and evolves during the pandemic (what with virtual NBA and F1 events already taking place), the opportunity to see how some of the greatest and bravest motorcycle riders on the planet fare on the video game version of the TT is an exciting one.

Not all riders are as skilled on the video game version as they are on the real course, and a couple of them have admitted to using the game to practice and revisit the course when not on the Island.

However, as with previous versions of the TT games, it isn’t just something for the riders to enjoy. Anyone can pick up a controller and enjoy playing Ride on The Edge 2, and there are gamers of different ages, nationalities, and genders who love playing video games.

This is where I come in. As the esports specialist for Amber Gaming, I have an extensive network of gamers across the world who work in the video game and esports industries. As with the riders, some of them are exceptionally good at the game and others have only recently picked up a copy and are enjoying learning the course for the first time. This is not only a fantastic opportunity to showcase that video games can be played and enjoyed by anyone, but it also allows these gamers to spread the word among their peers about the TT and the Isle of Man.

Gathering eight gamers from different parts of the world – including a few from the Island – to take part and join the riders in this unique, ground-breaking event, and to work on this project with Digital Isle of Man, the Department’s Motorsport team, Nacon and Greenlight Television is something I am proud of.

The Virtual TT is not an esports event, which is something else I have provided guidance on, nor is it a replacement for the real TT: it is something every gamer and TT fan, both on and off Island, can be proud of.

Think you've got what it takes to be a pro Virtual TT racer? Now is your chance to put your skills to the test with TT Isle of Man: Ride on the Edge 2. Go head-to-head with other gamers for your chance to win a trip to TT 2021! For full details on how to enter, visit the TT Game Official Facebook channel.