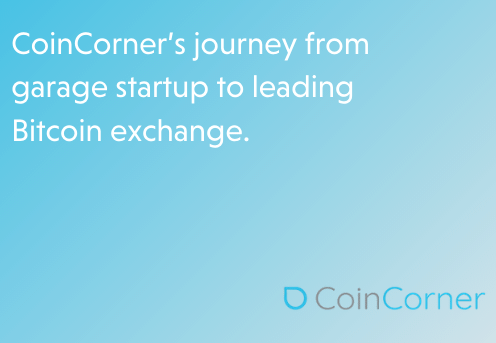 In 2014, Bitcoin was still in its infancy and many people, including CoinCorner’s soon-to-be co-founders, were mining Bitcoin at home. It was a challenging time to buy Bitcoin easily in the UK and the inability to do so sparked the team to spot an opportunity in the market. They pivoted from mining and used the funds they had accrued to set up CoinCorner - a Bitcoin exchange with the mission of making buying Bitcoin quick and easy - seizing the chance to be involved in an industry while it was still emerging and making a name for itself. Over the last 6 years, CoinCorner has grown from a small startup to a team of 18, to support over 200,000 retail and business customers in 45+ countries.

Each of the co-founders brought different skill sets to the table, tech, finance and operations, but importantly, all had a genuine interest in seeing Bitcoin grow. Danny, the now CEO of CoinCorner, was already very entrepreneurial and had experience in building a range of websites from concept and working at a number of tech startups before founding a software development company (eventually leading to CoinCorner).

Startups require considerable financial backing, especially in the tech space, but CoinCorner is proud to remain independent of any Venture Capital or financial institute funding - very rare in tech startups. In the early days of the company, the founding team took a small Angel Investment from a local high networth individual and since that point, have been entirely self-sufficient.

A real experience of startup life

Danny shares his views on getting CoinCorner off the ground: “It was one of the hardest things I’ve done in my life, with late nights, weekends, rejections, and not being paid as examples of some of the norms! The Bitcoin industry was also one of the most difficult to operate in; we lost bank accounts, business and funding opportunities due to the industry’s reputation at that time, and yet we continued as a small and close team, until the sentiment eventually changed in 2017.”

What CoinCorner does and why...

A Bitcoin exchange at its core, CoinCorner helps people to buy, sell, send, receive and store Bitcoin. You can register and buy as little as £10 within 10 minutes. As a 24/7 industry, people can buy Bitcoin whenever it’s convenient - either by timing the market themselves or using CoinCorner’s Auto Buy service.

Alongside this, CoinCorner is developing innovative services including earning Bitcoin “cashback” through online shopping with top retailers and by supporting businesses that are interested in accepting Bitcoin payments via CoinCorner Checkout.

Finally, the team makes it a priority to educate the general public about Bitcoin, how it works and how to buy it safely. Offering in-house talks and working frequently with the media, CoinCorner helps to dispel myths/noise around Bitcoin, as well as help new people to enter the industry.