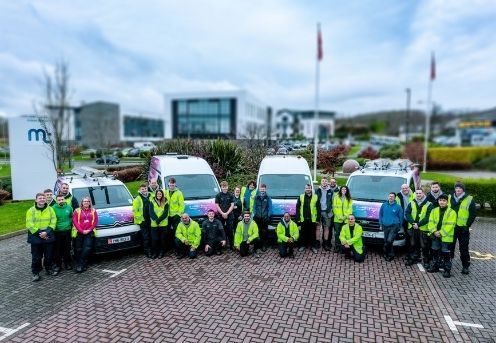 The Department for Enterprise and Manx Telecom have confirmed that 50% of the Isle of Man’s homes and businesses have now been by passed by ultrafast fibre broadband – one year into the programme’s accelerated four year roll-out – and meaning that more of the Island’s population can now connect and enjoy faster and more reliable broadband speeds.

Last year Manx Telecom was awarded a £10 million contract to deliver ultrafast fibre broadband in nine intervention zones across the Island as part of the Island’s National Broadband Plan (NBP).

The NBP zones are remote, difficult to reach areas where around 25% of premises and homes are located and, typically, where providing high speed broadband services is likely to be commercially unviable. This NBP is running in tandem with Manx Telecom’s ongoing commercial roll-out of Island-wide fibre broadband. An additional £1.5 million was provided in August 2021 to accelerate the programme from five years to four.

Richard Oliphant, Head of Telecoms and Infrastructure at Digital Isle of Man commented:

‘We are quickly progressing in our ambitious target of securing a fully connected future for the Island and our goal of reaching 75% of premises within three years. It is fantastic to see the work progressing at such pace.

‘Keeping our Island connected is an absolute priority for us as it not only supports our residents at a time when remote working is commonplace, but it also provides them with reliable connectivity as we all seek to stay in communication with friends and family across the globe.

‘Last year we saw the Isle of Man jump up 23 places in worldwide broadband speed rankings, and we will see this continue as more of our premises are passed and more of our residents are connected. At the end of the roll-out we hope to see the Isle of Man significantly further up the global broadband speeds table, making the Island an attractive place for not only residents but for businesses to grow and succeed.’

’We are pleased to have achieved 50% of premises now passed with fibre, including more than a quarter of those identified as hard to reach under the National Broadband Plan. This is despite the many delays and other constraints our engineers have faced in carrying out the works during a pandemic.

’We are very much on track to reach the target of 99% premises passed by fibre by the end of 2024. We are also working hard to connect premises to the network once it becomes available to them, enabling customers to enjoy the advantages of fibre’s faster speeds, improved resilience and capability as soon as possible, and ultimately contributing to our national ambitions for world-class connectivity.’

The National Broadband Plan has a target of reaching over 99% of Island premises by year-end 2024.

To find out when ultrafast fibre broadband will be available to you and how you can connect, visit the dedicated National Broadband Plan Information webpage: www.iomdfenterprise.im/national-broadband-plan/