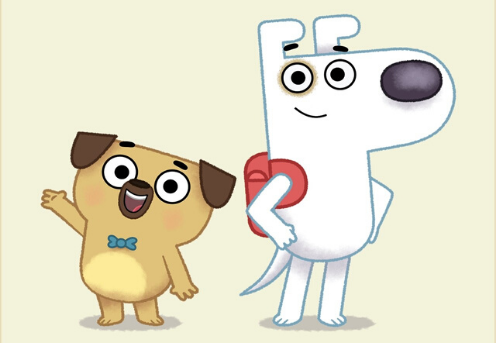 The animated TV series begins with episode 1, “Dog Loves Snark” on CBeebies on Monday 2nd March 2020 at 9:15am, with episodes following every weekday at the same time.

Voiced by John Thomson (Cold Feet, The Fast Show, Coronation Street, Waterloo Road, Bill & Ben and Wallace & Gromit) and Craig Cash (Gogglebox,The Royle Family, Early Doors and The Mrs Merton Show), Dog Loves Books tells the story of bookshop owner, Dog, and his best friend Pug. Whenever Dog or Pug have a problem or a question, they look for the answer in one of their beloved books. The series is aimed at four to six year olds.

“We love the way the format quite literally brings books alive in the exciting and exhilarating adventures of Dog and Pug”, said a CBeebies executive producer.

Flix Facilities, the studio behind the series, is the longest-established and largest truly independent post-production facility in the North West of England, across two sites in MediaCityUK, a third in the centre of Manchester and now a fourth, state-of-the-art facility here on the Island.

Opened in September 2018 and based on Finch Road in Douglas, Flix Facilities IOM consists of “high end” grading, dubbing and edit suites including all types of animation capabilities together with a project specific animation studio and currently employs 13 staff, made up of both local and international talent.

For over a quarter of a century, Flix has had a passion for programme making; with a niche in children’s programmes and animation. The company has been involved in producing many of the most iconic children’s shows to be broadcast over the last 27 years, including the Bafta award winning Old Jack's Boat, Postman Pat SDS, The Furchester Hotel (for Sesame Workshop and CBeebies) and several exhibition films for the Film Director Tim Burton.

Flix Facilities IOM Ltd directors and joint owners Paul Hardman and Leo Casserly say; “We’re delighted that we have finally reached this significant landmark. Flix can offer specialist post production and full animation services to a diverse client base, essentially meaning that projects can remain on Island from script to screen, creating a new legacy for Isle of Man media for years to come”.

Laurence Skelly MHK, Minister for Enterprise, said: ‘The Isle of Man is home to a diverse range of dynamic digital businesses and we were delighted to welcome Flix into our thriving community. The Island has a strong legacy in media; we have a strong pool of talented individuals and it’s great to see companies like Flix relocating and building on these foundations. I wish the project and Flix every success.’