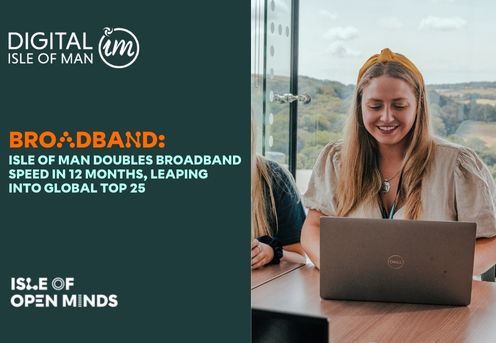 The Isle of Man has overtaken the UK and Ireland as it moves into the top 25 jurisdictions globally for broadband speed. The move now places the Isle of Man in the top 10% of 220 countries tested - the highest the Island has ever ranked on this measure.

The latest data, released annually by cable.co.uk, sees the Island move 20 places into 22nd in the world for 2022. The leap up the league table reflects a near doubling of the Isle of Man’s average broadband speeds, which over the last 12 months have increased from 52.10 mps to 91.97 mps.

The movement reflects the consistent and rapid progress made in increasing broadband speeds in recent years, with the Isle of Man moving from 63rd in the rankings in 2019 and to 42nd in 2021.

Through its National Broadband Plan and National Telecommunications Strategy, the Isle of Man Government is rolling out fibre broadband across the whole Island to ensure that telecoms infrastructure meets the needs of both businesses and individuals.

’The Economic Strategy sets out the importance of robust technology and related infrastructure, which is essential to enhancing the Island’s proposition as a tech-enabled and future-ready place to live, work and invest.

’Through the acceleration of the 2018 National Telecommunications Strategy, the Island has invested in becoming increasingly equipped to support growth across existing business sectors, as well as cementing the Isle of Man’s forward-looking approach to actively investing in and attracting digital related industries.

’Alongside this, ensuring all residents can engage in a modern and well-connected society is an important element of the Island’s offering to individuals as we work towards building a secure, vibrant and sustainable future for all.’

The Isle of Man Government’s target is to pass 99% of premises with fibre broadband by 2024, a goal accelerated by a year to help residents access fibre broadband faster. Currently 75% of all premises have access to fibre broadband, meaning that the Island is well on its way to meeting this ambitious target.

’Ensuring that the Isle of man has world-class digital connectivity and the government has the best possible platform for delivering digital services is a key priority for us. We are delighted to have accelerated our National Broadband Plan, which is being delivered by Manx Telecom, to commit to pass 99% of premises with fibre broadband on the island by 2024, supporting local businesses working to build the smart future of the Isle of Man’s economy.

’Rolling out ultrafast fibre broadband to every part of the Island is a hugely important part of our national strategic infrastructure, especially now that remote working is more widespread than ever before.’

Securing ultrafast broadband across the Island is a key priority as it supports public services becoming digitally enabled, helping residents access a range of benefits. Advanced fibre infrastructure and improved broadband speeds will allow the Isle of Man to be a hub for smart technologies, supporting the business and public service innovations of the future.

’Manx Telecom is delighted to see this marked improvement in the Isle of Man’s table position following our extensive, continuing investment in fibre infrastructure and our ability to measure end users’ attainable average speeds.

’We know how important it is for the Isle of Man to be an attractive location for businesses and how first-class connectivity enhance the lives of everyone living here. We are making excellent progress against the government’s National Broadband Plan and look forward to further advances in the island’s ranking in the future.’