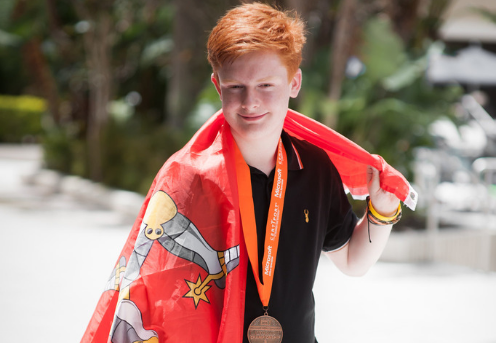 We’re a little bit in awe of St. Ninian’s High School student Adam Drummond, who not only recently completed his Microsoft Excel accreditation qualification (finishing as one of the top ten students in the UK), but also went on to compete in the UK Microsoft Office Specialist national finals earlier this month. We’re delighted to report that Adam won in the Excel category and will be going on to represent the UK at the World Finals in New York next month!

Adam joins students representing the UK in the Word and PowerPoint finals. The event, organised by Centiport and sponsored by Microsoft and Adobe, sees international students from 116 different countries aged between 13 - 22 compete for the title of World Champion.

This isn’t the first time that Adam has represented the UK (and of course the Isle of Man). Last year he competed in the Word category and placed third in the World! No mean feat.

Adam is passionate about representing the Isle of Man on the global stage, taking the Isle of Man flag with him everywhere he goes, and flying it on the same stage as the likes of USA and China. When winning his third place prize, the CEO of Certiport announced “If you didn’t know about the Isle of Man before this event, you definitely do now!”

We wish Adam all the best in this years’ competition!

To follow all of the latest news from the event, visit: http://www.moschampionship.com/