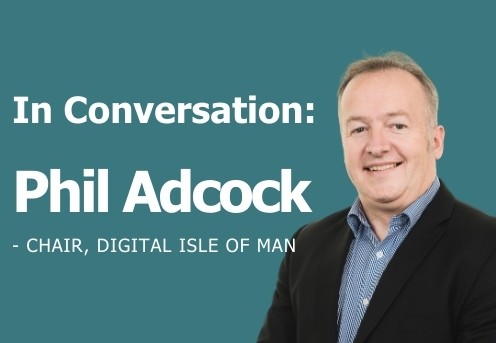 Since our inception in May 2018, the Digital agency has made it our goal for the Isle of Man to become a world-leading centre for digital innovation, with the team and Board sharing a common outlook when it comes to opportunities and driving industry change.

Announced as our new Non-Executive Chairman earlier this year, Phil Adcock – Founder and Chief Technical Officer at Domicilium IOM – took up the mantle from Lydia Barbara, and he is keen to continue her hard work at supporting the Island’s sustainable growth of its digital economy.

Having moved to the Island at the age of 21, Phil co-founded Domicilium, a leading datacentre and network provider headquartered on the Island that was at the forefront of the domain name and online gaming industries: it's a full-circle moment for Phil as he Chairs a Board whose assistance he could have used when establishing a start-up in 1991 in a then-nascent sector.

‘It was a very smart move for the Isle of Man Government to create the Digital Agency, as it’s created an industry-driven approach to growing the economy and has established a designated team dedicated to moving at the industry’s pace and listening to the needs of industry,’ explains Phil.

'It's been designed to allow industry to provide input into creating the strategy for digital, so it's giving industry that voice. From feeding in ideas, feeding in intelligence, or providing strategic input, none of this has really been possible before, so that’s a huge change.’

It’s this reason that Phil cites – among others – that led to him getting involved with the Agency Board and the subsequent decision for him to run for Chairman: the opportunity to drive meaningful change and contribute to the alignment of the Government’s efforts to provide industry with what they need to be able to grow.

‘Being involved as a Board member and now Chairman provides me with an opportunity to build on things that are going well or challenge what I believe could be done better,’ says Phil. ‘It’s about engaging with industry effectively, acting as an ambassador, and encouraging interaction with the Agency.’

The Isle of Man has established itself as one of the most attractive locations for digital businesses, and the creation of Digital Isle of Man has encouraged the growth of a robust digital sector, advocating for industry and providing facilitation between public and private sectors.

You don’t need to eat and breathe Digital to be aware of the sector’s rapidly increasing prevalence: FinTech has exploded into mainstream consciousness; esports has become one of the fastest-growing industries worldwide, with historically traditional bankers and investors taking notice of the industry's potential to make big money; and Internet of Things (IoT) has continued to grow and evolve, with experts predicting that over 75 billion IoT devices will be connected to the internet by 2025.

Yet while the Isle of Man has established itself as a tour de force on the global stage of digital innovation, there’s still an element of us being a well-kept secret, and Phil recognises the need to raise awareness of what Digital Isle of Man can offer and what benefits it can help bring to business.

‘One of the things I'm really looking to do is improve the way that we communicate and work with industry, which means that we need to be getting out there and actually talking to them a lot more.’

This means Board members will be out and employing the role of Digital ambassadors, explaining to industry what it is that we do and that if they have an idea, to explore it with the Digital Agency and put papers forward for consideration for funding, ensuring they are supported through the process, so outcomes are successful.

Over the past three years, the Agency has created some solid foundations for the future of the digital economy, the initiative to establish a blockchain sector on the Island, the introduction of an esports proposition and continuing the improvement of the Island’s infrastructure with the National Broadband Plan and development of a LoraWAN network to enable more tech trials for IoT. In addition to this, the Agency continues to revaluate the Island’s mature eGaming sector to reinvigorate and progress the industry on the Island.

Phil intends to take those building blocks and evolve them into something exciting, meaningful, and beneficial to the Island and everybody involved in the sector. He uses the Island’s gaming industry as a prime example.

‘The gaming industry has been around for quite some time, but real progress was made as a result of the Digital Agency being in place. Over the last three years, there has been some incredible interest in the Island, and this hasn’t happened organically: it’s happened because the Agency has taken what was already in place and stepped it up a gear.’

Alongside nurturing elements already in existence, it’s evident that Phil is keen to identify new opportunities and create strategies to develop economic value. The Agency has already developed strategies for IoT, esports, and blockchain, and there's vast potential in untapped opportunities including leveraging our strong track record in regulation and compliance to innovate around data, data science, and AI ethics, which all align with the Government's broader climate and net-zero carbon emission plans.

The next stage of delivery is to focus on getting things done and putting appropriate resources behind initiatives to make sure they're delivered.

‘It’s vital that industry is engaged and feels empowered, and we can make this happen by making it an integral part of our decision-making process: by encouraging ideas, discussing and evaluating them, and bringing requests for support to the digital Board.’

But perhaps the most notable strength that Phil brings to the Chairman position is his experience of starting a business in the digital sector and what the start-ups and entrepreneurs of today require from the Government.

'Finding ways to engage and support smaller, entrepreneurial business is going to be fundamental to the Agency's future success. Start-ups are a healthy part of any digital ecosystem, bringing with them new skills and innovation.'

'It's equally important that we continue to support the development of digital skills to ensure that we have a digitally-enabled workforce capable of meeting the industry's future needs, including supporting employers in building vocational training programmes.  By investing in the Island's workforce, we'll ensure the Island's continued success as a world-leading centre for digital innovation.'

Digital Isle of Man is currently seeking expressions of interest for new board members, to apply click here.