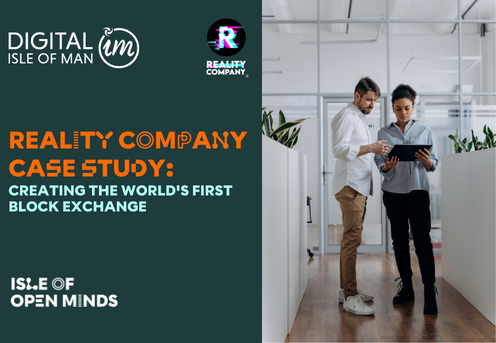 Reality Company is creating the world’s first Block Exchange – a decentralised exchange that bridges the gap between real-world productive assets and blockchain technology. When setting up Reality Company, there were many things that had to be considered, not least location. Attracted by the Isle of Man’s stellar reputation and supportive environment, the Island was a clear choice for their needs. As of Q3 2022, Reality Company were successfully registered with the Isle of Man Financial Services Authority for AML/CFT compliance.

Building a successful brand in the crypto space presents numerous challenges, from finding reputable partners to navigating the vast regulatory landscapes across multiple jurisdictions. Reality Company’s goal is to create an un-bureaucratic blockchain-based platform and wanted an ideal environment for investors and entrepreneurs alike. This involved overcoming a number of technical obstacles and finding pragmatic solutions to meet the high standards in the Isle of Man.

Securing oversight in the Isle of Man

Before settling on the Isle of Man, Reality Company researched multiple jurisdictions. Its aim was to find a professional environment with like-minded partners and a strong blockchain community that would allow Reality Company to thrive. The company decided that the Isle of Man offered a prime environment for the launch of the Block Exchange due to the supportive ecosystem and expertise available on the Island.

“The wealth of knowledge that rests within the Isle of Man’s regulatory, professional, and commercial sphere is fantastic,” said Edward Cotterell, CEO and co-founder of Reality Company. “There is a genuine desire to do business and a practical, proactive approach to doing business. It has been refreshing to operate in such a progressive environment.”

To support the company in its early growth phases, Reality Company sought the help of Suntera Digital, a leading digital consultancy based in the Isle of Man. Arno Cruywagen and Lorna Richards from Suntera Digital played a crucial role in supporting Reality Company’s journey, from introducing the group to the Isle of Man to making introductions to key stakeholders and partners on the Island. The consultancy was also a key player in supporting Reality’s registration with the Isle of Man Financial Services Authority under the Designated Business (Registration and Oversight) Act 2015 for AML/CFT compliance.

Due to the Isle of Man Financial Services Authority’s thorough and fair approach to dealing with the crypto industry, the start-up has found its journey in the Isle of Man welcoming and productive and free from unnecessary bureaucracy.

Reality Company also received hands-on support from the Digital Isle of Man team, who were available to assist from the very first stages of its relocation. Through Digital Isle of Man, the company gained personal access to world-class firms that are traditionally inaccessible to early-stage start-ups.

The company has benefited immensely from its participation in the Isle of Man’s Digital Accelerator Programme – a scheme designed to support blockchain businesses with their growth and accelerate their regulatory journey.

“We're excited to welcome Reality Company to the Isle of Man's Digital Accelerator Programme and we're delighted that they have chosen the Isle of Man as their home,” says Chris Reilly, Strategic Partnership Manager at Digital Isle of Man. “This is another example of blockchain innovation we're seeing on the Island and a welcome addition to the growing ecosystem we have in this space.”

Reality Company is now looking forward to continuing its growth in the Isle of Man with its first Initial Coin Offering (ICO) and the launch of the Block Exchange.