Reflections on SiGMA Malta 2021 by Digital Isle of Man team 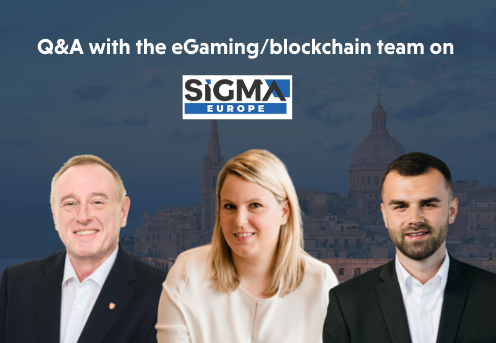 The Digital Isle of Man team has been a regular at SiGMA Europe each year. However, last year was different as the world hunkered down and cancelled all in person conferences and events. We decided to catch up with our team who recently returned from a week in Malta to attend their first eGaming event overseas in a while. Tony Ure (Head of eGaming), Amy Kneale (Strategic Partnership Manager) and Nathan Lunt (Strategic Partnership Executive) share their experience of attending SiGMA and how, if anything, has changed from the previous years.

HOW WAS YOUR EXPERIENCE WITH SIGMA MALTA, GIVEN IT WAS THE FIRST EGAMING EVENT YOU've ATTENDED in a while?

Tony: It was a strange and new experience to be at a conference after so long especially with over 10,000 people in attendance.

Amy: It was really positive to be back at a conference/ event after such a long gap, and it was evident by the volume of attendees and the exhibitors that everyone was glad to be back at events and the turnout was greater than anticipated. Being at the event was a reminder of how important meeting people face to face is, and the value events hold in relation to business development. It was great to see the growth of the AIBC (blockchain) element of the conference which this year had a larger presence and a separate conference space at the event.

Nathan: My experience of SiGMA 2021 was fulfilling. The trip demonstrated the value of how meeting face to face has a promising impact on developing relationships. It was immensely satisfying to catch up with some familiar faces and develop contacts with new businesses within the eGaming and blockchain sectors, relationships that present great opportunities for our economy.

WHAT WERE THE HIGHLIGHTS OF THE TRIP AND MEETINGS?

Tony: The team was very busy in the five days we were in Malta, as many meetings were arranged in advance once Malta businesses knew we were attending. It was encouraging to see a great demand for the Isle of Man gambling licence. Many Isle of Man companies were also in attendance at SiGMA including Amber Gaming, Affinity Group, MannBenham Advocates, Domicilium, Continent 8 and Microgaming.

ANY EXCITING DEVELOPMENTS FOR THE INDUSTRY THAT YOU WERE ABLE TO GATHER FROM YOUR INTERACTION WITH FELLOW ATTENDEES?

Tony: There were some concerns amongst Maltese operators since the Island's FTAF greylisting and the follow on impact on Payments and Banking. For us, overall it was well worth the trip as we conducted several positive meetings with companies interested in the Isle of Man.

To find out more about licensing or the Isle of Man as a home for your business contact us.