Explaining the surge in Isle of Man gambling licence applications 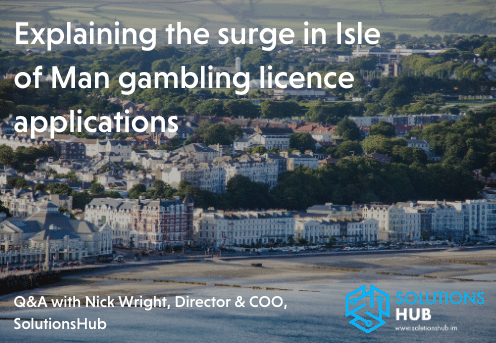 The Isle of Man has experienced a resurgence in the gaming sector, with the number of businesses applying for an Isle of Man gambling licence and setting up ancillary business swelling to unprecedented levels. We discuss the reasons why with Nick Wright, a former Isle of Man Gambling Supervision Commission (GSC) inspector and COO of SolutionsHub.

There has been a surge in companies applying for Isle of Man licences. Why is this?

The Isle of Man has a robust offering to the gaming sector, with professional skills and expertise honed since the infancy of the sector, but when one wants to understand the drivers for a sector they need to listen to the operators themselves and our clients are telling us that the Isle of Man licence solves their business-critical issues including access to emerging markets, banking, acquiring charges and regulatory instability.

The Isle of Man is politically transparent and extremely stable, with easy access to politicians and the regulator, who work closely with the private sector through Digital Isle of Man and the Department for Enterprise.

One of the things the Isle of Man does so well is introduce new legislation to support growth within the sector. While others take an authoritarian approach, enforcing a predetermined policy of how private businesses should operate, regulators in the Isle of Man collaborates with licensees to ensure new policies and legislation are appropriate and practical, while ensuring player protection standards are maintained and licensees continue to adhere to the highest ethical standards.

The Isle of Man has also shown to be forward-thinking and adaptable to changing trends and demands within the industry, providing a tier-one home for the leading cryptocurrency and blockchain brands.

We have seen a specific focus on Curacao operators applying for Isle of Man licences. Why do you think this is?

The common theme is from our engagements is treasury efficiencies, including access to banking services and acquiring options available for tier-one operators that are availed with competitive processing fees.

Only a few years ago, Curacao operators would simply open as European treasury company, but finding banking options for the treasury companies is becoming increasingly difficult and licensees are seeing accounts closed, forcing them to deal with less reputable banks and often IBAN providers, which presents significant risks to their businesses as such providers are not required to have the same liquidity levels as licensed banks.

The banking issue is compounded by tier-one processors becoming similarly difficult to engage, even setting up subsidiaries to offer higher rates to tier-two regulated licensees.

These issues have created a tipping point, whereby once an operator becomes a certain size, they have to de-risk their banking by obtaining a tier-one licence and availing themselves of more stable banking partners, while also increasing margins by accessing better acquirers and a reduction in processing rates.

The Isle of Man is a natural fit for Curacao operators who should not be accessing restricted European markets, and therefore often have a presence in LATAM, Asia and, increasingly, Africa.

How long does it take to obtain an Isle of Man licence?

One of the core drivers for the continued success of the Isle of Man licensing regime is the transparent and straightforward nature of the process of establishing the business and obtaining the licence.

Depending on the supporting partner a prospective licensee chooses to work with, the necessary steps to obtain a licence can be as little as a few weeks.

As soon as the licence has been submitted, the GSC turn the application around in a maximum of 12 weeks.

We have been doing this a long time and the beauty of the Isle of Man regime compared with others is the transparency. Our CEO always jokes with clients about how boring the licensing regime is, but that is true and that is exactly how it should be - a defined process with clear expectations of the licensee and a commitment from the regulator that should a prospective licensee meet the deliverables, they get granted a licence within the agreed timeframe.

What are the steps involved in obtaining an Isle of Man licence?

Applicants can choose licensing support from a range of highly skilled professional partners. They discuss the business model and agree document drafting parameters, so they can move forward with drafting and collating the suite of documents that make up the licence application and troubleshoot any potential pitfalls.

Simply, no. As their local partner, we take on much of the burden for them. We appreciate that Isle of Man licensing is an important piece of the puzzle, but it is just that; a piece.

Therefore, it is important to select an experienced local partner who takes responsibility for drafting the business plan, financial forecasts, AML/CFT Manual and all other policies and ancillary documents, which are then reviewed and approved by the client, ensuring that the regulatory requirements are met, while being practical for the business.

The prospective licensee will provide documentation around the ownership and any key personnel, but the local partner does the heavy-lifting for them.

The whole process then becomes much smoother, as we try to put ourselves in the Inspectorate’s shoes and cover off the questions that they would likely need to ask.

To find out more about applying for an Isle of Man gaming licence, contact our team.