Digital Matters: The Future is Quantum 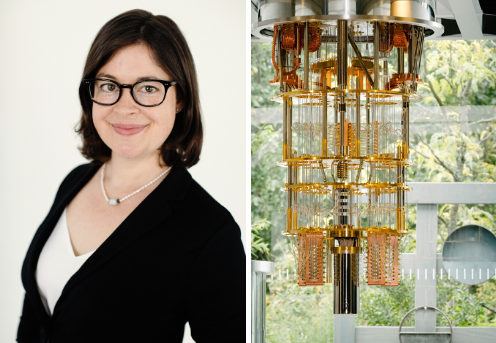 Quantum computing is having a moment.

A handful of weeks ago, Google announced they had achieved quantum supremacy, as their quantum computer performed a calculation that would have been impossible on a classical computer. And right now, as I write this, there are buses using quantum navigation to dodge and prevent traffic congestion in a European capital.

To start from the beginning, classical computers are what we all use today. They perform calculations in our laptops, phones, smartwatches, etc. Quantum computers are something quite different.

Rather than bits, quantum computers use qubits, which have two special characteristics that distinguish them from conventional computers.

Qubits are subatomic particles that exist in a state of being both 1s and 0s at the same time, a phenomenon called superposition. Once you observe a qubit, much like opening the box holding Schrödinger’s cat, it firms up into either 0 or 1. A computation is done while the qubits are in this superposed state, which is fragile and difficult to maintain.

Together, quantum superposition and entanglement allow for far greater information density and computing abilities than can be found in classical computers.

As mentioned, a superposed state is difficult to get and to hold. A lot of the work involved in running a quantum computer is simply to keep the qubits cold enough and quiet enough for long enough to finish a computation.

How a quantum computer actually works is like this. The image with this article is of a prototype 50-qubit quantum computer from IBM. The part that looks like a chandelier acts as a cryogenic refrigerator. The silver cylinder at the bottom contains the qubits and other working pieces of a quantum computer. Data comes in from a classical computer to the cylinder, which has been cooled to near-absolute zero, or 0.015 Kelvin (-273 degrees Celsius). The computation happens in the cylinder while the qubits are entangled and superposed, and it stops when the qubits collapse into their 1s and 0s. This produces a result, which is then sent back into the classical computer to be analysed by its programmers.

And a note on programmers: you essentially have to be a PhD-level theoretical physicist to program these. There still needs to be layers of abstraction built before you can ask questions of a quantum computer like we all do with Google.

A lot of money is pouring into quantum research – China recently spent $1bn on a research facility alone – but everything to date has felt rather theoretical rather than practical.

Then a paper leaked from Google claiming they had achieved quantum supremacy, and the geeky side of the internet went a little nuts.

In their paper, Google described an experiment in which their quantum computer solved a problem in just 3 minutes and 20 seconds that would have taken the world’s fastest supercomputer about 10,000 years solve.

Breaking this barrier could be seen as being like breaking the 4-minute mile or getting Kitty Hawk into the air. This could be recognised in future as the event horizon that changed everything. Now that it’s been done, we can expect that advances will come in leaps and bounds.

To demonstrate the rate of advancement that could take place (and I have to emphasize could, a lot of this is still theoretical and in pure R&D mode): a new law has been proposed called Neven’s Law, which states that quantum computer power will advance at doubly exponential growth relative to conventional computing. This was described by one researcher as a line in a graph angled towards the centre of a screen, then hitting the middle and shooting straight up.

What Can We Solve with Quantum Computers?

Quantum computers will be able to solve highly computationally complicated problems, particularly around optimisation. Like traffic.

At the Web Summit this year, Volkswagen ran a field trial in collaboration with the local bus company and D-Wave, one of the leading quantum computing research companies. Nine buses were fitted with a tablet running an app that directed drivers through the busy Lisbon streets. Using positional data provided in real time from smartphones of other Lisbon drivers, the buses were steered down routes that:

Consider the difference with Waze or Google Maps, which steer all drivers away from traffic, often creating more congestion in these secondary routes.

To get to this point, Volkswagen assigned twelve physicists and mathematicians to work alongside D-Wave in their California office for three years.

Other practical uses of quantum computing include more accurate weather modelling and climate change impact predictions, a greater understanding of how the natural world works, and early detection or even cures for cancer and other diseases. Quantum computing will be a boost for machine learning as well, as the computational power will allow for far more advanced algorithmic work to be done.

What are the Risks?

Encryption will both benefit and suffer from the advancement of quantum computing.

Because quantum states become solidified when observed, a quantum key used in encryption can only be successfully hacked by breaking the actual laws of physics. Quantum encryption is very likely the future of encryption.

On the other hand, because quantum computers can perform complex computations vastly faster than classical ones, all other types of encryption are at risk. Top-level encryption experts are watching these developments closely.

How widely used quantum computers will be is a big question. You can rent time on one of D-Waves Systems’ or IBM’s, but we’re a long way away from having a quantum computer in every home. They have to be kept at a temperature near absolute zero, colder than space, in order to keep the qubits in superposition long enough for a computation to happen, and most of us don’t have that capability in our garages.

Of course, back in 1945 the CEO of IBM said: “I think there is a world market for maybe 5 computers”, and we each of us probably have at least five computers in our homes. These things are hard to predict (although I bet a quantum computer would be able to).

Our fundamental understanding aside, Google’s breakthrough and Volkswagen’s successful field trial point to a near future in which our understanding of the universe is greater and our ability to solve humanity’s most difficult challenges is immensely improved.

by Lydia Barbara - Chair of Digital Isle of Man