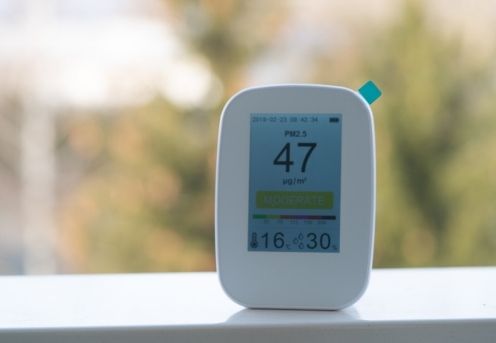 In recent years, air quality has become one of the biggest environmental risks to our health. According to the World Health Organisation, air pollution kills an estimated seven million people worldwide every year, largely because it increases the risk of developing diseases of the respiratory system.

Despite some attempts to minimise these risks, the threat of air pollution is at an all time high with no sign of backing down. It’s thought that by 2040, CO2 and NOx emissions from aviation alone will increase by at least 21 percent and 16 percent, respectively. While air quality is generally good on the Isle of Man we can’t become complacent and it is something that needs to be continually monitored so that problems can be spotted before they get worse.

On top of this, we have the coronavirus pandemic. As this virus is known for its impact on the respiratory system, there is a growing susceptibility and vulnerability in people exposed to low-quality air, especially indoors. It’s here where we need to focus our attention. Especially since humans spend around 90% of our time indoors - a number which has not only been on the increase over the past half century but has become the case during these times where quarantining and lockdowns are the new normal.

It is, therefore, paramount that the quality of the air we breathe indoors is of a sufficiently high enough quality, and if not, it is detected early enough for us to act on it through various means of monitoring, such as air sensors.

Aside from COVID-19, sensors can help us detect a plethora of pollutants in the air that may be accountable for causing disease in humans. Among them is particulate matter, which refers to the small solid and liquid particles suspended in the air, which penetrate the respiratory system via inhalation, causing a glut of cardiovascular diseases, reproductive and central nervous system dysfunctions, and sometimes even cancer.

There is also something called total volatile organic compounds – or “TVOCs”. Like particulate matter, these also refer to a group of particles which have an impact on indoor air quality as opposed to just one specifically. TVOCs are known for affecting your sense of wellbeing and how comfortable you feel inside a building depending on the intensity of exposure and for how long you’re exposed to them. For example, some people might get a headache from being in a room which is just painted, while others might just find the smell uncomfortable.

CO2 is a big issue here, too. When we breathe air with high levels of this gas, the CO2 levels in our blood rise, which reduce the amount of oxygen that reaches our brains. Studies have shown that this can increase sleepiness and anxiety, and impair cognitive function. This is especially important in educational institutions, where concentration - and the general health of youngsters - is vital.

However, by detecting and thus reducing air pollution levels through a range of sensors, it's possible to negate the chances of developing such illness, especially for chronic and acute respiratory diseases. But what are these sensors, how do they work and will they ever make their way into the mainstream? To answer these questions, we need to delve deeper into the role of the Internet of Things (IoT).

IoT and the Isle of Man

For those who haven’t heard of the Internet of Things before, it can be best understood as a collective term for many different devices (things) that can collect information from the world around them (via internet-connected sensors). These devices are clever in that they can send that information over the web to a service or application and privately, so that only the owners of the data can see it. When taken further, however, this information can be combined with other data to provide valuable anonymised insights used to identify trends and even make predictions.

The big attraction of IoT in air monitoring is that it can provide an overarching approach to all kinds of data, such as pollution levels, both indoors or outdoors. Over time, this can help us better understand a problem, how it is occurring and - eventually - identifying ways to build links between regulatory stakeholders, local authorities and citizens in a bid to improve health for all.

Investing in IoT solutions to monitor air quality also has financial benefits for local governments. Cleaner air means less budget is spent on air pollution-related health care, for instance, as well as helping the government with urban planning and transport routes to reduce pollution in hotspots.

This is something the Isle of Man has worked hard to put in place over the last few years and is continuing to improve going forward. Our IoT network is already available in several areas of the Island, with around 80% of our geographical area covered. There are more gateways to roll out, too, which should take us to well over 90% before the end of summer. Thanks to our successful IoT roll out, we’ll soon be seeing the arrival of air quality sensors in many indoor locations such as local schools and parliament buildings to help improve the air quality and protect the health of our people.

Spearheaded by Digital Isle of Man, this IoT Accelerator initiative not only seeks to improve air quality in crucial places like parliament and schools, but to promote the use of IoT for the social and economic development of the Island, which it is hoped will increase awareness in schools, businesses, organisations and government departments. Equally, the goal is to understand more about what is already happening within this space on-Island, share best practice and encourage collaboration.

To make it happen, Digital Isle of Man partnered with Manx Technology Group to roll out a dedicated IoT network based on the LoRaWAN standard. As a portmanteau for “long range”, LoRa is a low power wireless access network that has become a leading technology for many IoT use cases across the world.  Designed for low-data rate applications and therefore low power usage, it can also achieve a long range and is why it’s being utilised in this initiative: to provide Island-wide coverage as well as the opportunity for developing, testing and commercialising IoT solutions.

The air quality detectors being employed en masse are the Milesight AM100 Series Ambience Monitoring Sensors. Their roll out will consist of multiple devices that are built specifically for indoor ambience monitoring. They’ll do this by monitoring and displaying real-time environmental temperature and humidity data as well as CO2 concentration data to help people respond to indoor air quality problems and they monitor the ambient air level of TVOCs.

Sarah Ennett, IoT Manager at Digital Isle of Man, says: “We spend up to 90% of our time indoors, and poor quality air has a measurable impact on cognitive performance as well as being harmful to health. This is why we’re really excited to be working with Tynwald and the Department for Education, Sport and Culture to plan rollout of air quality monitoring sensors.”

Sarah explains that a healthy indoor environment means that there is adequate ventilation to introduce and distribute clean air, contaminants are controlled and the temperature and humidity level are comfortable.

“If we don’t measure these factors then we aren’t able to take action to improve our environment where needed,” she adds. “Importantly, at this time, non-ventilated indoor spaces can increase the likelihood of aerosol transmission of Covid-19 and the CO2 level can be used as a proxy for transmissibility.”

Digital Isle of Man will be closely monitoring the results and working on the best way to illustrate the trend data over time while releasing more information about this as the project develops. Initial deployments will be in place in early June and we’ll be releasing more news on those developments soon.

“This is also a great opportunity to involve the pupils in our schools, to illustrate a real application of this technology and how it can help us to inspire changes in behaviour,” explains Sarah. “I know it has been a real eye opener for me having a test device in my office and home, I definitely open the windows a lot more!”

So what will the future of IoT will look like in terms of sensors for the Isle of Man?

Beyond our pilot project with Tynwald and Schools, we are working with other government departments and third-sector organisations to identify opportunities for us to solve problems with technology.

By the end of 2021, we’re aiming to have at least 10 projects live alongside having the information available in an easy-to-digest format, for example, a Smart Island map that allows you to see data points like weather, air quality, river depth and, hopefully, many more.