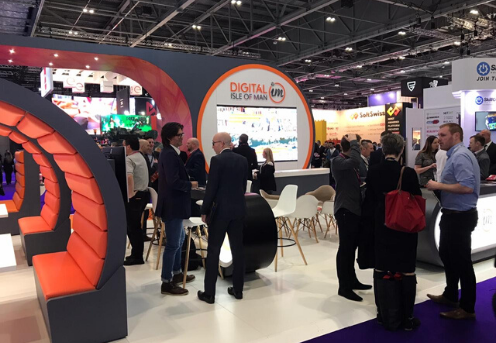 The first week of February marks one of the biggest and most important dates in the eGaming calendar – ICE London, a global hub for gambling and betting B2B experts. Strategic Partner at Digital Isle of Man, Abby Kimber, discusses on some of the highlights from the event and calls out some of the industry players who are flying the flag for the Isle of Man on this global stage.

ICE London is always a big deal on the eGaming calendar, the event is huge, with over 35,000 attendees from 150 countries and over 600 exhibition stands across the gambling and betting  ecosystem.  The Isle of Man Government have been attending this event for over 15 years – back to when the GDP for eGaming was non-existent. Exhibiting alongside our partners in industry has helped us to raise awareness of the Island and its proposition, contributing to the prosperous digital economy we have now, making up over 30% of the Island’s GDP.

As someone who only started working in this industry in 2011, I’d love to go back and experience ICE London in those early days for the eGaming sector to see how the event has changed – even in the past 15 years technology has evolved expeditiously and the event is a showcase of innovations that are driving the industry forward.

Blockchain is one of these (relatively) new technologies making waves in the eGaming industry and while blockchain itself is a very broad proposition with many different use cases, in the Isle of Man we’ve seen a high proportion of interest to date coming from blockchain enabled gaming businesses and ICE was no different. One of the benefits of using blockchain technology in this area is the increased transparency it offers. Data such as gaming results, winnings and pay-outs are recorded on a blockchain which means the data is immutable and easily inspected, this has given rise to the ‘provably fair’ game concept.

We were joined on the Digital Isle of Man stand by one such company licensed and with a base in the Isle of Man – FunFair Technologies. They provided a case study of what it’s like to go through both the Blockchain Isle of Man application process, as well as the GSC licensing process and it was a real plus to have them tell stand visitors of the positive experience they’ve had working with teams both in and outside of Government.

This year at ICE London also saw the introduction of an esports stream (esports is defined as competitive video gaming between two or more human players that others would be willing to watch). While its important to note that esports in itself is not gambling, like any other sport such as football, horse racing or boxing, bets can be taken on outcomes of a tournament and with a global audience of over 450 million people, that’s a pretty sizable market!

The ICE Esports Arena hosted a ‘Counter-Strike: Global Offensive’ tournament in which eight top pro teams from around the world battled it out to win a prize pool of $250,000 over three days. Alongside this prestigious tournament, talks and presentations were given to educate attendees on this exciting new sector, including talks from SMP esports specialist Chris Kissack who is based in the Isle of Man.

The Isle of Man’s Gambling Supervision commission already regulates a number of esports betting companies with licences on the Island so has experience in this sector, but moving away from the gambling element and looking to the core esports market, Digital Isle of Man is developing a proposition for the Isle of Man to add real value to this new industry. The Island is known for its gold-standard regulatory regime, and esports legislation, regulation and licensing would help strengthen the industry by providing a level of protection, actively policing against bad practice such as underage gambling, fraud, poor pro player treatment and fair distribution of prize funds.

It's always great to see so many Isle of Man faces at industry events such as this – it shows real strength in the Island as a jurisdiction for digital business and demonstrates our diverse digital economy. In-between meetings I managed to squeeze in some time to walk around and take in the ICE atmosphere. I visited the Continent 8 stand at an opportune time to watch their ‘Legends & Leaders’ panel session, chaired by KPMG Islands Group CEO, Micky Swindale and featuring five prominent C-Suite leaders in the industry, including John Coleman, CEO of Isle of Man based Microgaming. Stands I also spotted of companies based in the Isle of Man were Microgaming, iForium, MuchBetter, Champion Sports, Playtech and Quanta. I was also pleased to be able to visit the Habet Addiction Healthcare stand during one of their live demos; it’s fantastic to see innovation in responsible gambling coming out of companies based on the Island.

The highly important conversation around responsible gambling continued to be a key theme around the conference side of ICE London this year, with the focus being on prevention rather than cure and how the industry can stop problem gambling in its tracks. Regulation and compliance in this mature market also remains a focus and operators discussed the need to be proactive rather than reactive to increasing regulatory pressures.

The absolute stars of the show though have to be the Digital Isle of Man stand partners. At big events such as this we are joined by industry partners, each an expert in their field. This year we had eight companies from the Isle of Man’s digital ecosystem; Affinity, Capital International, Cavendish Trust, Domicilium, KPMG, Mann Benham, Manx Telecom, and SMP eGaming as well as licensing experts from the Gambling Supervision Commission.

Having these teams with their invaluable knowledge and skillset really highlights the wealth of experience and the rich digital ecosystem that the Island has, showcasing its proposition and why it’s a great place to do business. We couldn’t, and wouldn’t want to do it without them.

It's a wrap for ICE London 2020, but thanks to a bumper year for interest in the Isle of Man, our teams have a lot of work to do to welcome new businesses and new people to our beautiful Island!