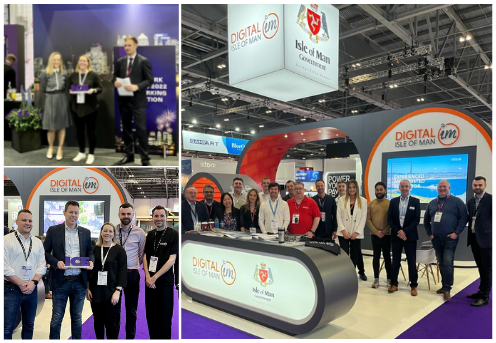 After a 2 year hiatus this April saw the return of the biggest event for the eGaming industry – ICE London, a global hub for gambling and betting B2B experts. Head of Strategic Partnerships at Digital Isle of Man, Abby Kimber, discusses some of the highlights from the long-awaited event and celebrates the industry players who are flying the flag for the Isle of Man on this global stage.

It was an absolute pleasure to get back out there and promote the Isle of Man as a jurisdiction alongside our industry partners at ICE London this year. After what seems like a very long time, and despite a bump in the road (a postponement from ICE London’s usual date of the first week of February to mid-April), Digital Isle of Man exhibited at the event alongside representatives from the Gambling Supervision Commission, Affinity Group, Amber Gaming, Capital International Group, Cavendish Trust, Domicilium, KPMG, MannBenham and Manx Telecom, with the objectives of:

- raising awareness of the Isle of Man and its offering,

- gathering knowledge on the sector and our target markets in order to feed in to future strategies and the Island’s value proposition in this area.

Having these teams with their invaluable knowledge and skill-set really highlights the wealth of experience and the rich digital ecosystem that the Island has, showcasing its proposition and why it’s a great place to do business and our stand partners really are the stars of the show.

The postponement of ICE to April presented a challenge as with it being so close to Easter and Passover, it meant that some of the industry chose not to exhibit this year and it was strange to see some of the legends missing and the exhibition was notably smaller than previous years. It was also clear that there was a reduction in footfall, in part due to the holidays but also due to Covid restrictions still being present in other parts of the world, making travel tricky for some countries.

But despite these challenges, our attendance at the event was a huge success for us and our stand partners and the Isle of Man stand had a lot of interest and it’s clear that face to face events are back and an important part of attracting new businesses to the Island.

Throughout the three day conference, the team attended a variety of networking events which provide an excellent environment for connecting with industry experts and those who help to promote the benefits of the Isle of Man far and wide. In particular it was great to see a number of Isle of Man businesses featured at the Global Gaming Awards with the awards themselves being adjudicated by Micky Swindale of KPMG and David Black of Continent 8 as part of the judging panel. There were nominations for Continent 8, Fun88, GBGC, Microgaming, PokerStars, Playtech and Yggdrasil Gaming to name a few!

As always ICE provides a wealth of opportunities to learn from some of the best in the industry and this year was no different as we attended the ICE VOX Masterclasses sessions on the Latin America market (LATAM). From sitting in on roundtable discussions with industry experts, to keynote address by the Managing Partner of Betsson, and panel discussions on the must-haves for successful LATAM expansion there was a lot to take in and discover about this growing market and we will be using the information gathered at the event to feed into our strategy in this area.

Concurrently our esports team attended a number of panel discussions around the need for a framework and the growing desire for governance within the sector which directly feeds in to our proposition in the esports space and allowed them to raise awareness of our offering and to connect with businesses who would benefit from working with the Isle of Man.

And lastly, we were delighted to receive an ICE Landmark Award for outstanding contribution to eGaming! The ‘Landmarks’ which were introduced to ICE in 2019, recognise the extraordinary achievements and successes of individuals and organisations and are based on nominations received from within the industry and this shows how well respected the Isle of Man is within the eGaming industry and the businesses which are licensed and located here.