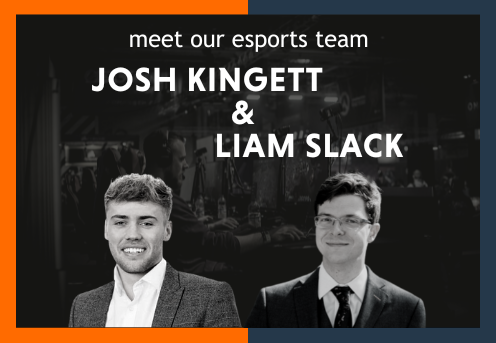 What makes Esports a viable career option and why choose the Isle of Man as the place to work in this sector? To get the answers we caught up with two of the newest members of our team who live and breathe all things Esports. Meet Josh Kingett and Liam Slack, Esports Executives at Digital Isle of Man.

How did you get into esports and was it always your first career option?

Josh: Growing up alongside an older brother seven years my senior, who I always saw as a hard-core gaming enthusiast, had an enormous influence on how many hours I put into video games during my childhood, and just how competitive I was. At 15 years old I made the conscious decision to pursue a career in the Army, instead of esports as a professional player, because, at that time, I didn’t believe there was enough investment in the industry to make it a full-time profession.

During my studies at high school and University, I continued to play semi-professionally in a number of games including World of Warcraft, PUBG, and League of Legends; and thereafter and to the present day recreationally. Immersing myself within the esports scene from a young age enabled me to build an extensive network with those who now work for some of the most prominent esports teams, production companies, tournament organisers and publishers across the globe.

Liam: Same as Josh, I grew up enjoying competitive multiplayer games, from earlier titles in the Call of Duty and FIFA franchises to StarCraft and League of Legends, once I built my first computer and went to University. I had also grown up taking part in local and school football leagues and it was an important aspect of my development; learning how to operate within a team, what leadership looks like, the importance of training and practice, knowing how to process frustration in defeat and be gracious in victory.

Around the time when the first professional circuit seasons for League of Legends came into the spotlight it occurred to me that a lot of the aspects of sport infrastructure that had helped shape my experience growing up were directly translatable to esports, but there were very few resources at the time supporting competitive amateur play. With this in mind I founded a company called CompeteLeague Ltd that was dedicated to the provision and content production of amateur competition, for players of all skill levels. That was my starting point within the industry - I consider myself extremely fortunate to have worked alongside some very talented individuals on some inspiring events since, both at CompeteLeague and in my subsequent roles with Super League Gaming and Bandai Namco Entertainment.

So let’s talk a bit about the Isle of Man, its connection to esports and why you chose the Island as a base to develop your esports career/org.

Liam: When I began my esports business seven years ago the industry was just beginning to find traction. There were little to no resources available to help an esports start-up find its footing, and processes that could have been simple with infrastructure in place were challenging. A lot has changed since then and a great example of the support and recognition the industry has received can be seen in the Isle of Man. The Island has a great reputation and track record in a number of other sectors and the same groundwork exists for esports businesses looking to establish themselves here. The Island has a thriving grass roots scene and we have a number of community programs and local TO’s running events on a regular basis.

The opportunity to help lay the groundwork and create new esports jobs locally for aspiring entrepreneurs and young professionals with an interest in careers in esports was extremely appealing.

From a personal standpoint I find the Isle of Man lifestyle very appealing and I’m also very happy to live and work at a place that is closer to my family, who reside in the UK after spending several years abroad without being able to visit them.

Josh: For me the biggest draw is the level of support the Government is willing to offer. I founded the first and only professional esports organisation on the Island: X7 Esports in December 2020.

The support X7 received from Digital Isle of Man has been invaluable to the growth of my Org. When talks began I never envisioned we would arrive at jersey sponsor, which helped us greatly as we were starting out. We attracted global coverage through a Forbes article when X7 became the first organisation in Europe to receive direct Government sponsorship; paired with our undefeated debut record of 13 wins and 0 losses.

Being able to showcase that we had the backing of a whole Government effectively allowed us to make our debut within the UKEL stand out even more. Showing you have that level of support greatly helps with credibility when engaging with other potential sponsors or partners. It is the same with other businesses who setup here, not just Orgs, saying you’re licensed, supported or just based here carries a lot of credibility.

Where do you see the Isle of Man in the next three years, in esports?

Josh: In three years from now, I envision the Island becoming both a pioneer and innovator in the esports industry. There are a plethora of experienced businesses on the Island who are capable of adding value, and assisting within this space. The Island also serves as the perfect location for global organisations to host bootcamps – offering unrivalled connectivity, unique landscapes and experiences to help competitors unwind, and total convenience with only short commutes to anything they might need.

The Isle of Man will become an integral part of how this industry continues to develop, and I look forward to contributing towards that future achievement, alongside my experienced colleagues.

Liam: In three years I expect the Isle of Man to be taking strides as a globally recognised regulator within the industry, working to provide competitive integrity, safety, and security to event operators and other businesses in the esports ecosystem. I am pleased to be joining a talented team with an ambitious initiative and I look forward to the positive impact we will make.

Josh: Having followed the League of Legends competitive scene for almost a decade, this is undoubtedly my favourite title. Despite no longer having the time to play much myself, it’s a constant reminder of how quickly the esports industry is expanding, as viewership and the fan-base of each team continues to grow at mind-blowing rates each year.

Personally, I have been following teams in Korea (LCK) and China (LPL) for longer than European teams, because the standard of gameplay is often a lot higher. Outside of my role with Digital Isle of Man, I am now working directly with two Korean veteran players, one of whom won the League of Legends World Championship in 2017, in front of 60 million spectators, hosted live in the Bird’s Nest Olympic Stadium, Beijing.

Contact our team to find out how we can support your esports business.