The power of blockchain is not (only) in decentralisation 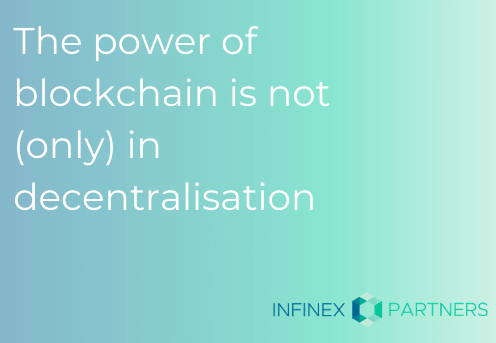 We have heard it so many times, “When there is no decentralisation it isn’t blockchain” or “When it doesn’t involve a cryptocurrency you cannot call it blockchain”. Many of these early advocates have since altered their opinion.

Another notable issue with decentralisation is the size of a chain over time requiring ever more storage capacity of each node as well as the high-power consumption of mining. The current estimated electricity consumption for the Bitcoin network is between 60 and 125 TWh per year. This is in the range of the annual electricity consumption of countries such as Austria (75 TWh) and Norway (125 TWh). (The Energy Consumption of Blockchain Technology: Beyond Myth by Johannes Sedlmeir, Hans Ulrich Buhl, Gilbert Fridgen & Robert Keller 2020)

The Proof of Stake (PoS) consensus seems promising in solving the issue of energy consumption. The probability of a node being selected to process a transaction is linked to an amount of cryptocurrency that the node has deposited and locked (“staked”) for this purpose. The deposit incentivizes the node to stick to the rules of the network, as any misbehaviour detected will lead to the node losing this deposit. The advantage of PoS is that it does not involve any computationally intensive steps such as solving the cryptographic puzzles in PoW. However, if one node has enough capital to stake more than 33% of the currency in circulation, it could corrupt the network. While this is unlikely to happen, such severe vulnerability weakens the potential of many use cases. Your average Joe would not easily obtain sufficient capital to break consensus, organised crime or a government-funded hacker group could.

Decentralisation is also subject to scalability issues. As the network grows, more transactions are processed and the longer it will take for a transaction to be processed. Network congestion makes processing a transaction more expensive, while the blockchain promise was to eradicate transaction cost. Ground breaking progress in this field includes a concept called “braiding”, where node consortia process transactions in parallel. Indexing of blocks and transactions is similarly governed to how Google indexes the web.

Until such time that the vulnerabilities and limitations are sufficiently addressed, we will probably not see any adoption of decentralised blockchain initiatives by government or regulated enterprise.

Unfortunately, decentralised blockchain has gained negative publicity. From the afore mentioned vulnerabilities to being the network of choice for criminals to sell drugs and launder their illicit funds.

As addressed in the article “A blockchain project requires mature management applications”, the applications of Blockchain Technology is endless. It is a correct assumption that in a private permissioned blockchain architecture (PPB), the level of trust is arguably less than in a decentralised equivalent. However, in many use cases the level of trust is already sufficient, especially when deployed in a consortium where trust among stakeholders already exists. In other use cases, there is more incentive for stakeholders to work together than trying to defraud each other.

A PPB runs efficiently on a Proof of Authority (PoA) consensus. When the architecture incorporates a consortium of nodes, where more than one stakeholder has permission to write, then node leaders can take turns. This results in a decentralised environment within the consortium. When there is no full decentralisation but competitors in a consortium take turns in getting to consensus about a transaction: then no single entity can manipulate or rewrite transactions. It is easily traceable if a node commits a false transaction. The stakeholder will risk the consequence of having its permissions revoked or worse. When implemented correctly, a PoA consensus indirectly benefits from an additional layer of trust that we see in a PoS consensus. The risk of losing trustworthiness as a stakeholder and the associated consequences is incentive enough to stick to the rules.