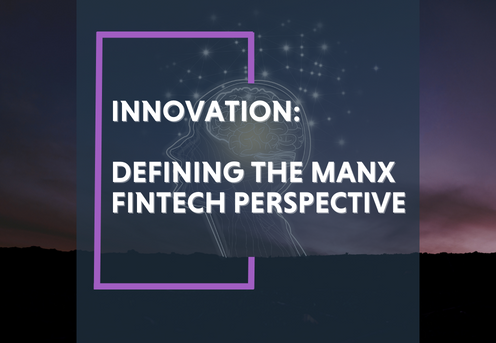 “Fintech is reshaping the financial experience of millions of people and businesses around the world today, and has the potential to dramatically alter our understanding of financial service tomorrow. We’re in the thick of the development of an Internet of Value that will deliver sweeping, positive change around the world just as the internet itself did a few short decades ago.”

Fintech (or Financial Technology) is the convergence of the Finance & Technology worlds. This is not just about existing financial companies using more technology, it is also about technology companies offering new financial services, often with niche versions of products that have existed for some time but done without the encumbrance of history.

Independently, the Financial Services and Tech Sectors underpin the Manx economy, so this new fusion of the two is an opportunity that should be well within our comfort zone. But how did this relatively new intersection of these two elements happen?

The opening up of the market opportunity – a crisis in confidence

The Financial Crash of 2009 exposed several flaws in the global financial system, which shifted consumer trust in large financial institutions into a greater willingness to try financial alternatives to the mainstream providers. This became the birth of the modern incarnation of Fintech, where technical innovation and innovators were encouraged to break apart the functions of current institutions and introduce greater diversity and competition.

In the analysis of the crash, regulators realised that product innovation and interaction within large financial institutions had moved at such a pace that hidden systemic risk had built up without the regulators realising this existed due to the “products” used internally across the financial system being so complex and incestuous. So, in conjunction with the new risk appetite of consumers, the regulators set about deconstructing the barriers to challenger propositions and actively encouraged new entrants to make inter-relationships and risk within the financial system more opaque and diverse.

This trajectory also led to the UK regulator splitting itself up and forming the very first regulatory sandbox. In 2021, with the Kalifa Report on UK Fintech, this industry sector was identified as the predominant industry that the UK Government is investing in to lead it out of Brexit and Covid downturns whilst simultaneously helping to establish the UK as a leading Fintech jurisdiction.

The extraordinary events of Covid also compelled the public to look at change and adaption in different ways. Digital working has become a component of everything we do, from education to shopping to social wellbeing via video conferencing. A need to adapt has produced an unprecedented degree of technology adoption across society. This adoption is set to accelerate even more as efficiencies inside big organisations meet high adoption levels of disruptive technology. It is in this light that we are looking at Fintech and its effect on the Isle of Man economy and outlook.

The evolutionary factors of Fintech

The evolution of Fintech into its current understood sectorial form is due to a combination of factors:

The original incumbent providers of financial services evolved over a long period of time into a highly consolidated financial service provision in terms of the handling of money, including payments, deposits, loans etc. For these all-encompassing service providers, big was always good, and hence significant entities merged or were bought out. Then in the 1980s and 1990s, you saw a wave of Building Societies de-mutualising to become banks and floating (Abbey National being one example). This meant they could reuse and invest more and more of their deposit assets to gain investment income. This led to less diversity and concentrated risk that contributed to the crash. Fintech, and its inherent diversity, have become a natural solution to this risk concentration when combined with a number of other factors.

As the financial system went into meltdown in 2009, a number of key lessons were learnt and subsequent action was taken against them. The first of these was the use of assets for onward investments. Many banks were merged with Retail Banks that took customer deposits and Investment Banks that were seeking to use those deposits for maximum gain. However, unlike a Building society which had two products that they kept in balance (deposits or savings and property loans), these large institutions had a much more diverse and complex set of investments where there was not such a close relationship between risk and liquidity. Therefore, when some risky assets failed (the sub-prime lending in the US where the same risky asset was leveraged multiple times), the knock-on effects were catastrophic, as the movement of money around the systems that supported clients being able to take their simple deposits out came very close to collapse. The second realisation was that the large institutions were so large and so complex that they were almost impossible to monitor from a regulatory perspective.

These two items changed the face of regulation and, then the first demands were made for the Institutions to be split up into ’ring-fenced‘ entities and also for the regulators to consider smaller, more diverse services in an increasingly competitive environment as a good outcome. In the UK, things like the selling of Faster Payments/BACs processor Vocalink from collective bank ownership to Mastercard and the enforcing of PSD2/Open Banking were implementations of this. As part of this ’ring-fencing‘, the offshore banks headquartered in the UK had to make these offshore components completely separate entities from their UK parent companies in terms of control, risk and, in particular, liquidity and deposits. This was the start of a combination of change in regulation and change in the Financial Institution’s structure that sowed the seeds for functions that previously were within traditional Financial Institutions to be provided individually outside them.

In a parallel period to this change in regulatory attitude, access to technology changed rapidly. Moore’s Law has always defined that computing power will double every two years and, so the cost will halve. This has generally held true for decades, the net effect is that all things related to computing get more powerful and cheaper each year. The speed of the internet and accessibility through mobile phones and apps has also opened up access to global technology. In order to build and service these propositions, you can use a ’pay as you go process’. ’Systems as a Service’ (SaaS) are now proliferate, so you no longer need an upfront capital investment to create a proposition or run it within the vast AWS or Google global clouds.

This means that more and more capability exists to build technology solutions at a low cost. Fintech is now a major area where innovators are using this advantage to deconstruct the legacy systems of the incumbent providers. Innovators are taking elements of the legacy system and are finding new ways to achieve just that one element, but without any legacy and without the need to maintain the existing customer base in the same way. Simple examples include loans (in particular micro-loans or syndicated loans), Foreign Exchange, and domestic & foreign payments. All have propositions now that just do that function whereas before they were the preserve of a traditional bank. This is a process called Intermediation and has led to “Challenger” banks such as Revolut and Clearbank being formed.

The incumbent providers may actually use some of these disruptors themselves (and may eventually acquire them), but their purpose in the context of an incumbent tends to be in areas where they can increase efficiency to compete with the challengers. At its highest level are the challenger banks themselves. Free of legacy and looking to concentrate on a particular vertical market segment, they have a huge competitive advantage. A new entrant can choose one product to concentrate on and ignore all others. An example is a new Fintech that purely does micro-loans, so it doesn’t offer accounts, deposits or even loans of scale or longevity (like mortgages), so can be very marketing and operationally focussed on doing that one thing very well and very efficiently.

Change in the model of trust

The final element is the concept of trust. Let me use an example of credit card processing to illustrate this. We used to use credit cards with the carbon paper swipe machines and a signature. This was really not very secure as a copy of the signature was on the back of the card for you to copy. However, at this time, the cost of changing the system was higher than the losses that were being incurred.

However, the increase in fraud and the decrease in cost of implementation crossed over at some point and, then the UK Chip and PIN was introduced. This drastically reduced fraud. The more recent incarnation of this is contactless. This effectively has less security than the old signature because all you need is the card, you have no obligation to associate your ownership of it. A number of years ago, the attitude of customers would not have allowed this, but this has been embraced, even if some people do not fully understand the risk. It is that characteristic that has led people away from the ’trusted umbrella‘ of a financial Institution to consider using almost any product that appears cheaper and more convenient.

What we have now is a proliferation of apps that perform functions (payments being a primary example); Millennials in particular take no heed of longevity, reputation or regulatory protection - they seek the innovative.

All of these things independently would have been a threat to existing financial institutions but put them all together and, it creates a tsunami of potentially disruptive technology. Many products are now seen to be ’of the crowd‘ so peer to peer (at least in appearance) and linked to social media. This ’socialisation‘ of key financial transactions is the driver of the ’New Fintech‘ revolution, and it is a revolution that needs to be heeded as a paradigm shift in future business models.

The Financial Services Industry has been one of the backbones of the Isle of Man economy for many decades, so we have a vested interest in the way that it operates and interacts with our financial prosperity and wellbeing. A significant amount of effort is being invested in defining our context in this ’brave new Fintech world‘, building to a specific and globally competitive Isle of Man Fintech Strategy by the end of 2022. In the process of constructing that strategy we will be opening up aspects of this as we progress to gain opinion and make sure that we maximise the benefit that this provides to the Isle of Man Business Community as well as for Manx Consumers

On the morning of 24th August, one such event will be a session held jointly by the Digital Agency, Finance Agency and FSA at the Manx Museum on ’Demystifying Financial Regulation‘. We would encourage you to reserve the date in your diaries until further details are released. We look forward to welcoming you on the exciting journey we are preparing to take.