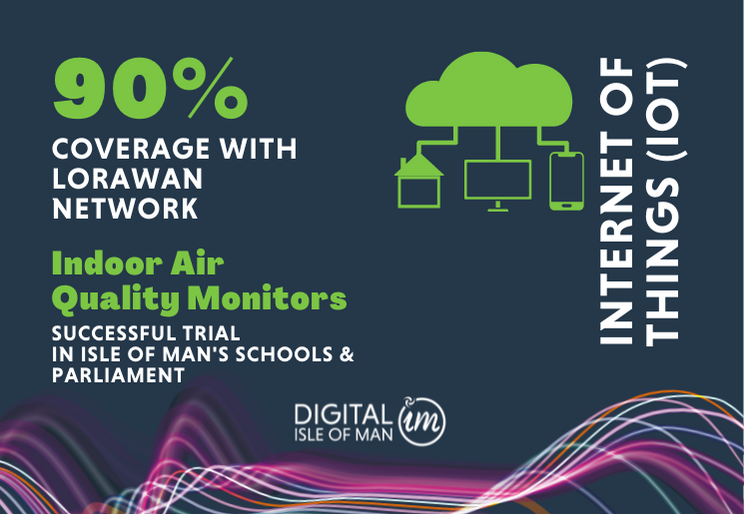 IoT is already a massive market and revenue opportunity and one that shows no sign of slowing down, analysts will vary on the numbers but all agree they are big.  One source states that there are already 10 BILLION connected IoT devices worldwide, generating 441 BILLION US DOLLARS in revenue, a huge opportunity for tech firms and service providers.  The technology can also benefit us more widely in society; introducing efficiencies, saving money, reducing our carbon footprint and helping us lead healthier lives.

For Isle of Man businesses there are two different, but complimentary, types of IoT benefit; those that can make money from selling and supporting IoT solutions, and those that can save money or enhance their operations in some way as a result.

Through 2021 we’ve rolled out an Island-wide IoT network (LoRaWAN), on-boarded our first trials, and given access to several innovators to allow them to learn and test ideas.  We conducted an air quality monitor trial at Scoill Phurt le Moirrey which was very successful and led to further roll out across all schools and also in Tynwald (Isle of Man Parliament).

Looking forward to 2022 we will keep our goal of growing the Isle of Man economy through IoT firmly in mind and have ambitious plans to deliver several new projects.  We want to make the resulting IoT data publicly accessible and have that displayed in a way that makes sense, a Smart Island map by the end of the year.  Through publicising our projects and producing case studies, we will actively work to recruit two new partners to trial innovative solutions on our Island.