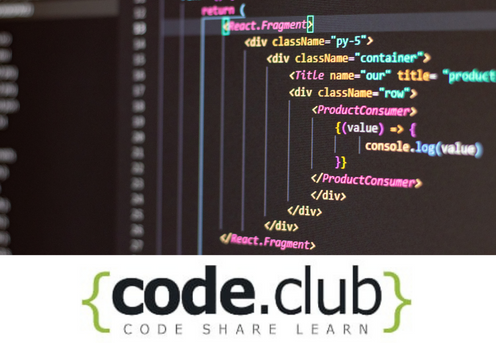 Owen Cutajar shares a retrospective view of the early days of Code Club (along with his first-ever press release)!

“We are all affected by computers in some way. Whether that's because we use a mobile phone, play computer games and spend time on the internet, or whether it's because we visit a doctor, go to the bank or vote in an election, technology has transformed our lives. As this technology becomes more and more pervasive, it’s important for people to have an understanding of how it works and to realise that these systems aren't powered by magic, but are built and designed by ordinary people. There is one ingredient needed to make all of these diverse things work the way they do - CODE!”

This was the first paragraph of the press release that started Code Club and is immortalised on a manx.net page dated 5th of March 2014. Looking back at this makes me cringe a bit inside, my writing style has changed since 2014, and that first sentence just feels... wrong somehow. However, it does bring home how much I have learnt over these last few years. This was the first Press Release I ever wrote, and the purpose was to reach out into a public space to gauge whether there was any interest in setting up a Code Club. It also marked the start of a journey of discovery which led to establishing a local charity, promoting computer skills to hundreds of Manx students every year.

In those early days, everything we did was an experiment. I thought that pushing out that press release would result in a few like-minded individuals getting together to plan what we could do in the Isle of Man. Instead, we had more than a hundred people turn up, filling our venue and completely derailing us from what we had planned. The energy in the room was palpable, in a way that only cramming together people with a similar interest can be, but not conducive to a rational discussion. This led us to regroup and change our plans, but we started running a course in Scratch the following week. We have been running coding classes ever since, in different venues around the Isle of Man, every Saturday between 4pm and 6pm and every year introduce more and more students to programming, electronics, cybersecurity and a range of associated subjects.

Fast forward to 2022, we are still meeting every Saturday between 4 pm and 6 pm and are currently being hosted by Barclays Eagle Lab in Douglas. This week, we have a Scratch class between 4 pm and 5 pm, followed by a Maths Revision class between 5 pm and 6 pm. We also use the Eagle Lab co-working space to provide a place for people to work on their own tech projects. Most of these are students who have attended our classes, and some are volunteers who help others, but the intention is to bring together tech enthusiasts from around the island and create a community where people can engage with one another, share what they know, and learn something new. Our sessions are open to anyone who wants to attend, and thanks to the support we’ve had from our benefactors, we’ve been able to keep our Saturday session free, so anyone who wants to learn will have no barriers to doing this.

One of our main objectives it is to promote Manx talent and provide opportunities for local individuals to participate in international activities and events. We’ve been participating in a cybersecurity competition called CyberCenturion for several years now, and we have had a fantastic result this year, with one of our senior teams winning the competition and one of our junior ones placing second in their category. Around 450 teams participate in this competition from all around the UK, Crown Dependencies and Oversea Territories. Winning this competition was an outstanding achievement and a testament to the skills and capabilities of our teams.

This win was the culmination of years of learning within the team, enabled by the support that they have been given. Code Club is made possible by the time and effort of a number of volunteers, and it was only through their contribution that we could help these individuals learn.  We also provided them with an environment where they could compete and organised the trip to the final. Digital IOM was instrumental in making this possible by providing financial support that allowed both teams to travel to London, compete against the other top teams, and come back with their prizes.

Looking back on how Code Club has evolved over the years, one of our main successes is that we have managed to create something sustainable. We’ve managed to open almost every Saturday for the last eight years and look set to keep this up for the foreseeable future. One of the more rewarding facets is seeing the kids who joined us all those years ago wanting to be involved in running the Club. Now that we are a Charity, we have established a formal committee with roles that they can step into, and we are looking forward to seeing how they shape the Club to be more effective. For my part, I’m immensely grateful to everyone who has lent their strength to this cause, enabling us to create an organisation which promotes learning, sharing and community.

This article was written by Owen Cutajar, founder of the Code Club.