Affinity Group: Blockchain tech and the need for regulation 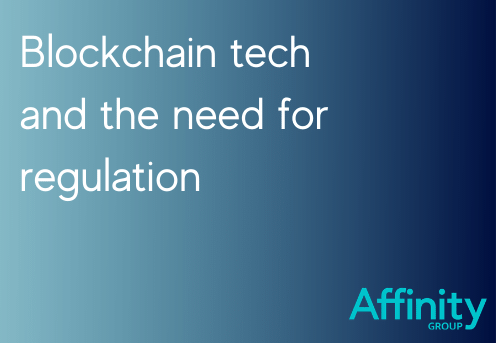 Affinity Group director Alex Gardner explains why regulation is key to growing mainstream trust in blockchain technology and how the Isle of Man’s regulators are leading the way.

For many, blockchain is the great hope for the future of the finance industry. Decentralised, transparent and - theoretically - infallible, distributed ledger technology is here to make banking, lending, borrowing and investing quicker, safer and accessible for us all. However, the reality is that perception is by no means mainstream … yet.

There remains widespread skepticism, bordering on mistrust, around the world of cryptocurrency especially from those who observe from a distance. And it’s hardly surprising. The crypto world has hardly covered itself in glory in the past few years, with millions being lost or stolen in exchange hackings, data losses, dodgy initial coin offerings (ICOs), you name it. Indeed, there are plenty of people whose instinctive response to the word “Bitcoin” is: “Scam”.

So, how do we change this perception? How do we build trust? The answer lies in regulation. Some die-hard members of the crypto community will baulk at the notion. Some argue that cryptocurrency is intended to be totally independent of traditional institutions such as banks and regulators but that is an unrealistic ambition.

For any financial model to work, it needs liquidity. It needs to be embraced by users and for that to happen, those users need to feel safe. And that’s where government authorities have a role to play as regulators. There needs to be checks to prevent digital currencies from being used for illicit activities such as money-laundering and financing terrorism, otherwise the general public will never trust the technology.

Likewise, regulators can directly protect users and their funds but ensuring wallets and exchanges, for example, meet the same high standards of security you would expect from your bank.

In the Isle of Man our government recognises these points and its forward-thinking approach to the regulation of distributed ledger technology has made the island a world-leading territory for blockchain businesses to flourish.

With technology evolving at a rapid pace, Digital Isle of Man’s Sandbox allows businesses to explore opportunities, working closely with regulators and under flexible licensing conditions to map the way forward for all parties to succeed.

The government also offers an Accelerator Programme to support businesses considering the Isle of Man as a base, those in the processes of setting up home here and those already established on the island. The Accelerator Programme serves to help blockchain businesses in a variety of ways, from promoting new ventures, providing introductions to possible partners, regulatory advice to financial support.

The Isle of Man’s willingness to embrace the challenge of blockchain regulation is a shining example to others and very much needed to help inspire faith in the future of crypto.