What makes an esport an esport? 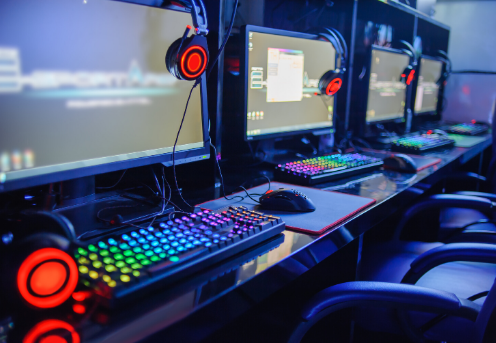 by Chris Kissack, Head of Esports, Digital Isle of Man

“Esports, that is a big deal now. I wish I has carried on playing video games as a kid, they earn loads of money."

"That must be exciting. What actually makes an esport an esport?"

These are the most common responses from those not in the esports space when I tell them what I do, which is head up Digital Isle of Man's esports proposition.

I love talking about esports and video games, so most of these questions I welcome as an opportunity to educate and discuss something I am passionate about. It is a little trickier, however, to answer the last one: defining what makes an esport an esport. There is no definitive way to answer this and it is a question which is one of the most debated within the industry.

It is universally agreed that the very first esports event happened way back in October of 1972. The video game being played was called Spacewar and the contest was held in Stamford University. The winner received a year-long subscription to Rolling Stones magazine. It wasn’t until eight years later in 1980 that the first official video game competition took place - the Space Invaders Championship. The event had a great attendance and 10,000 players took part in the contest. So, while it was not called esports back then - it had names such as Cyber Games and eGaming (way before the gambling and betting industry adopted it) - competitive gaming has been around for a very long time. This was a few years before I was born in fact and most definitely before any of the world’s best players in esports were born.

Unfortunately, for anyone reading this who is unfamiliar with esports, I am not going to dive into the ecosystem of esports or start to debate why I strongly believe esports is a sport. That conversation will take much longer, though is one that I definitely willing to go into over LinkedIn or face-to-face if you’re interested. Instead, what I will be covering in this article is what actually makes an esport an esport?

Dota 2 is, at the moment, my favourite MOBA (Multiplayer Online Battle Arena) and there is no doubt that it is considered an esport. Last year’s International, the concluding tournament of the year’s circuit, had a prize pool of nearly $35 Million US Dollars. There were 18,000 fans watching from the Mercedes-Benz Arena in Shanghai and a further 1.97 million concurrent viewers watching around the world in its peak viewership online. This year, the International will be returning to Europe, taking place on Stockholm, and with as it celebrates its tenth year, it will undoubtably draw in bigger viewership and have an even bigger prize pool than ever before.

Are these the ingredients needed to make a video game an esport? What if one of those ingredients is missing? Like the tree falling in the woods and nobody around to hear it analogy, what if two Dota 2 teams compete against each other and there is no one around to watch them play? Does is then cease to be called an esport?

Does the presence of playing for prize money make it an esport?

There are titles which offer little or no prize money in their tournaments, yet still attract large viewers and respectable attendance figures. Then there are speed runs, contests, and events where the challenge is to complete a single player game in the quickest time. These contests raise millions of pounds for charity and require the same levels of dedication and skill as playing multiplayer titles. Is this not the same as sports within athletics? No matter whether you are undertaking athletics on your school track or at the Olympics; it’s still a sport. You are competing against the clock and someone else's time.

Does a title have to have an objective where you destroy your enemy in battle, either with weapons, controlling minions, or champions?

While the most popular esports titles do currently share this destructive trait, it’s not one indicative of the entire sport. The racing scene is more popular than ever and sports games like FIFA and NBA titles are growing in viewership. Then you have titles like Rocket League who have amalgamated football and racing together to carve its own niche within the esports world. You can go beyond that even further into fields with tractors and hay bales in the competitive world of Farming Simulator, which had more than $250,000 in prize pools last year within its European League.

The common denominator is the community and ultimately the fans. That’s the ingredient that is key here. If a title can attract and build passion within people from all walks of life who not only want to play it, but also watch it and be inspired to compete at the highest level, then is that what it makes it an esport?

You cannot force a game to be an esport. With very few exceptions (Overwatch being the main one), a title which is created with the goal of it being the next stadium-filling esport is most likely doomed for failure. Some of the most successful and popular titles in esports were created by fans for fans. Whether that is the original Counter Strike mod of the original Half Life or the Warcraft 3 mod DotA which ultimately spawned Dota 2, they were created by the community.

Does it matter? Yes and no. It is not as hotly contested as “is esports a sport?” for example, but it still is an important question to ask and one to have healthy debates over. It is not uncommon for me to attend a tournament or esports conference and meet friends and contacts who are in different camps when it comes to whether Fortnite is or isn’t an esport. Again, sadly, that’s a discussion for another time where I am not running dangerously close to maxing out my word count for this article.

My final thoughts on the matter, ‘What makes an esport an esport? is this. As you read this, there will be games being played that you or even I will have never heard of. Every day there are new titles being worked on by independent developers and community mods being created by passionate fans who want to craft something the original designers had never envisioned. These titles could very well be the next CSGO or Hearthstone. If there is passion, excitement and enthusiasm within the title’s community of designers, players, and fans, then those are some of the best ingredients in what makes an esport and esport.